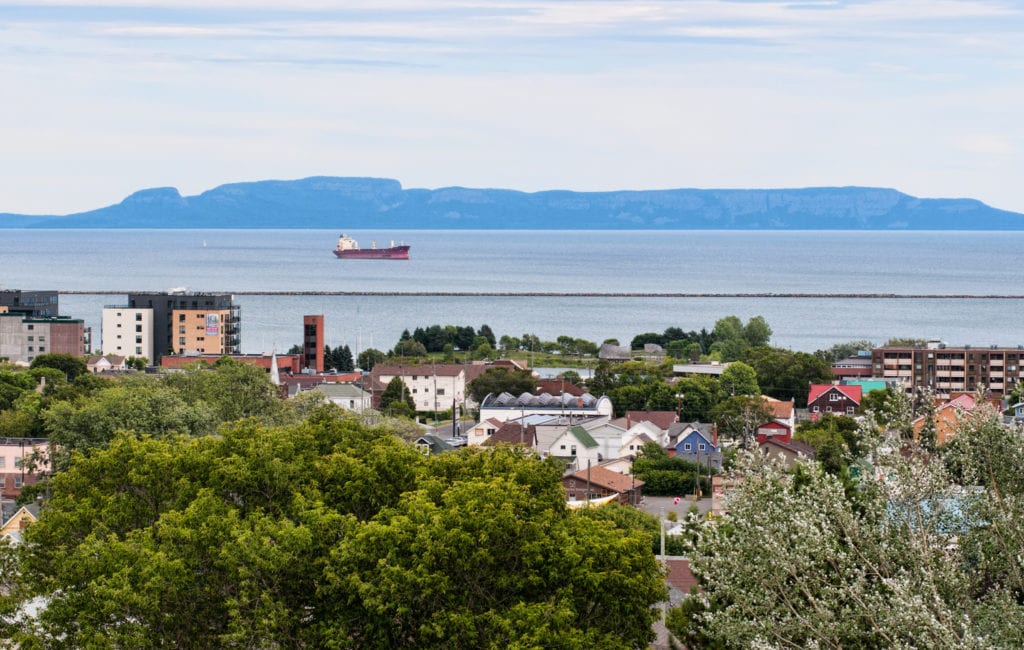 I am back to my office in London after spending two weeks in Thunder Bay where I conducted a jury trial. This blog doesn’t talk about the case, but rather some of my thoughts and observations gained during my time away from home in another part of the province. 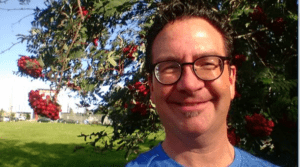 Our weather in southern Ontario is often the envy of the rest of Canada , including the northern parts of our own province, but I was fortunate to run into strikingly good weather while in Thunder Bay. I had even been warned ahead of time by one of the local judges “to be sure to pack warm clothes” as they were already experiencing frost in early September. I heeded that advice, only packing pants, long-sleeved shirts, and sweaters – only to end up at Walmart, where I had to buy shorts and a T-shirt!

On one of the early days into the trial, my wife complained to me over the phone about the cold, damp, and blustery weather back home in London. Well, it was a different weather system in the north – I took some joy in taking this selfie and sending it to her on a glorious afternoon after the close of court: 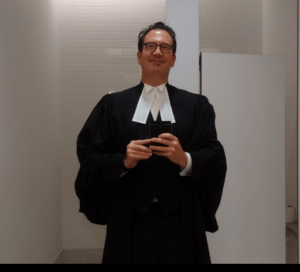 The last time I appeared in court in Thunder Bay, I attended the old, original courthouse. For this trial, I enjoyed being in a state-of-the-art building, that I learned was a duplicate structure to the courthouse built in Oshawa. Evidently the government has tried to make use of existing courthouse plans at more than one location around Ontario. The courthouse was spacious and offered the technological features needed to play videos and show documents to the jury on a large screen with an ELMO device.

There was a very nicely appointed lawyers’ lounge and library which made my stay comfortable. I had a locker and space in which to robe: 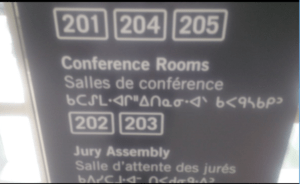 In the south, we don’t pay the attention that we should to the traditions and culture of our Indigenous people. In general, I observed much more of a presence and focus on Indigenous culture in Thunder Bay at large and within the courthouse specifically. Northwestern Ontario’s first Indigenous People’s Court is located within the Thunder Bay courthouse. The signage within the courthouse, in addition to the usual English and French, included a native language which I believe is written in Ojibway. I thought this important enough that I snapped a picture to send to my children: 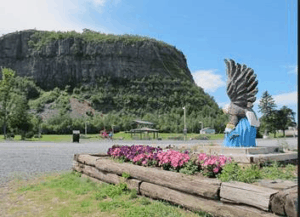 Thunder Bay is actually an amalgamation of two towns – Fort Williams and Port Arthur. I noticed the locals still referenced these old town names when describing where they lived or when directing me to a restaurant. No matter where you were however, you could not escape the beauty of the natural features.

Immediately behind my hotel was Mount McKay, a striking geological feature located on native land overlooking the Fort William side of town:

The most iconic feature, however, was The Sleeping Giant, the peninsula of land, on the Port Arthur side of town, that resembles a giant laying down to rest. One Ojibway legend identifies the giant as “Nanabijou”, who was turned to stone when the secret location of a rich silver mine now known as “Silver Islet” was disclosed to white men :

We’re Not in Kansas Anymore, Toto 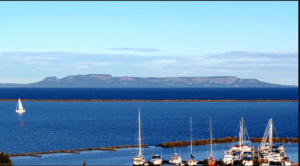 If I only looked at the strip malls and grocery stores I could have been in any city in Canada. But sitting down one morning to scan the local newspaper over breakfast, it was very apparent that I was no longer in London. One morning the theme seemed to be about black bears – something I’m not exposed to at home. The front page headline related to the spring bear hunt and the support for a reinstatement of the spring bear hunt as a means to keep the population of nuisance bears in check. On page 3 of the same paper was a story about an elementary school where all the students had to be kept inside because of two black bears seen roaming nearby.

No Free Time, Except…

A trial is not a vacation, so I didn’t have any free time to hike, bike, or explore, but one day in the middle of the trial, when we finished for the day by the lunch break, I did make my way to the local music store where I purchased a “backpacker guitar”, also known by some as a “traveler’s guitar”, which will now be a lifelong souvenir from my stay in Thunder Bay. It is really important to take care of yourself, while you are taking care of others, and for me there is no better way to relax, decompress, and take my mind off things than sitting down with my guitar to plunk out some tunes, accompanying myself while I sing. I had a great chat with the proprietor of the only real music shop in town and left his store with a Martin backpacker guitar in hand, something small enough to fit into the overhead compartment on my return flight home. It has a full size fret board, but a small body, giving it a sound that is two parts guitar and one part banjo.

Contact Andrew | View all posts by Andrew Murray
Read More About Blogs
Previous Article:
« Here’s What You Don’t See on Suits
Next Article:
A “Brain Kiln” to Benefit the Delhi Community Health Centre! »