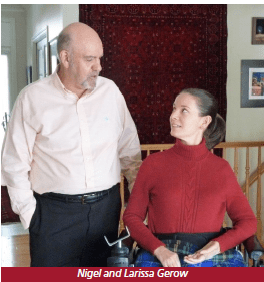 There are many people with spinal cord injuries who I could honour. I have had the privilege of acting for a large number of people with spinal cord injuries through my occupation as a personal injury lawyer. I have seen too many young people in their prime who have had to face the challenge of rebuilding their lives after a spinal cord injury and yet they have found a way to continue and be productive. I have had the honour of representing individuals, such as a young hockey player who sustained an injury and has gone on to be a multi -medalist winner in the Paralympics for wheel-chair rugby. Similarly, I have represented a high school student who lost the ability to use his legs due to an accident during a wrestling match in gym class. He has taken up sledge hockey to replace the athletics he can no longer do and coura-geously moved forward with his life.
But for this article, I want to honour Larissa Gerow.

I met Larissa for the first time when she was in the Critical Care Trauma Unit at the hospital. She was, and still is, a beautiful young woman of only 26 years of age when the driver of a vehicle who had failed to look to his right before making a right-hand turn. This caused her to fall from her bicycle, resulting in quad-riplegia.

There were no outward signs of a physical injury; no bruising, no cuts or scrapes, and I found it incredible to believe that after something that happened in a moment, she would have to adjust to life with quadriplegia.

As I came to know Larissa and work with her for many years, what most amazed me about her was her unbelievably positive outlook on life and her optimism despite her injury.

I am ashamed to say that here I was, a healthy individual who is able to walk, to run, to bike, to dance, and to hug my loved ones, and I had a more pessimistic outlook on my own life than Larissa did on hers.

“Whenever I saw her, and whenever I still see her, Larissa is always smiling and has an optimistic outlook on life. She never let her disability stop her from travelling to various parts of the world despite the difficulties involved in doing so.”

For example, on one occasion, she had to sit on an airplane for six hours until the airline found staff to assist her in getting off the plane. For another trip, she had the tenacity to persevere and search out what ended up being one of only two vans available for rental in France that were equipped to be used by someone using an electric wheelchair.

Contact Nigel | View all posts by Nigel Gilby
Read More About In The Media
Previous Article:
« Has Your Car Been Recalled?
Next Article:
Maia Bent and Jacob Aitcheson discuss the Licence Appeal Tribunal’s new rules »