The Importance of Having the Right Tools for the Job

Last week, I did something that I have not done in a very long time: I got stuck on a country road in a very large snow drift, which is impressive given that I was driving a nearly 6,000 pound vehicle with four-wheel drive and winter tires. It happened unexpectedly and in the middle of a blizzard. I never saw the drift before I slammed into it.

I recognized immediately that I needed help to get out. I called for a tow-truck, which took ninety minutes to arrive. The tow truck could not get close enough to my vehicle to simply hook on and tow me out (I was that stuck!), nor was his winch line long enough to reach my vehicle from the closest place he could safely park. The situation looked dire – and we were running out of daylight.

Fortunately, the driver was experienced. He knew what to do.

Out came the shovel and the chains. He explained that we needed to remove as much snow as possible from under the vehicle to increase the weight on the wheels (because the vehicle was essentially beached on the snow drift). This was not an easy task and took some time. He and I alternated shovelling because it was exhausting. A set of heavy chains was stretched out on the ground behind each of the rear wheels so that, when attempting to reverse, the wheels had something to bite onto.

We attempted seven times to reverse but without any luck. After each attempt, we shovelled some more. With every attempt, a little more snow became dislodged from the previous attempt, and slowly but surely, we dug the vehicle loose. On the eighth attempt, the vehicle backed-up, bit on the chains, and rolled backwards like nothing had ever happened. In the end, the tow truck itself did nothing other than deliver the shovel, chains and an experienced driver. 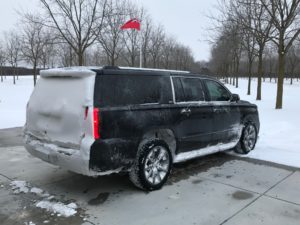 I’ve been thinking about this incident since it happened and it occurs to me that what happened that day, and how I got out, is a little like a personal injury case. They start unexpectedly and when you are not prepared. When they happen, there are usually no ‘quick fixes’; lawsuits take time. They cannot be forced. They require patience and perseverance. They are moved forward with steady attention and effort. Experience matters. Having the right tools for each case matters. Personality matters.

I am glad that my driver was calm. I was fortunate that he was experienced. I benefitted from the fact that he had the right tools for the job and knew how to use them. He projected confidence, which reassured me: he never doubted that he would not get me out of that drift.

I got lucky that the towing company I called sent a capable driver. Not all personal injury lawyers are equally trained or experienced. But if you need a lawyer, consider hiring someone with the same skills as my tow-truck driver – and trust me when I tell you that it will make all the difference.

Read More About Law and People
Previous Article:
« Cracking the Glass Ceiling – One Discussion at a Time
Next Article:
So What is My Duty to Clear Snow and Ice at My Home? »